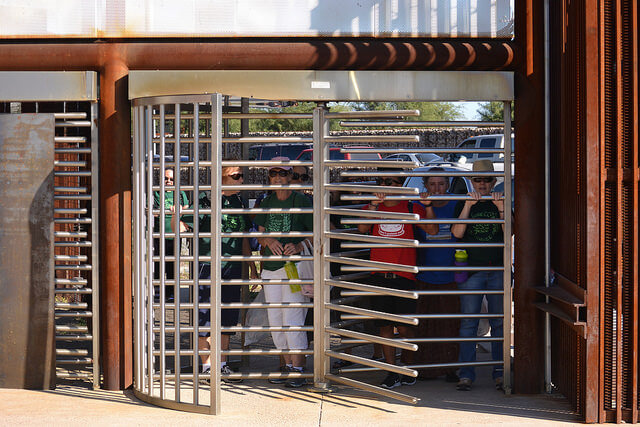 I thought talk of building the wall would end quickly, but since it hasn’t, I went to southern Arizona and drove along the border, from Organ Pipe to Bisbee, to see what was what.

Heading from Tuscan to Organ Pipe, we passed through this small town. And I must say, the question asked in the town’s name remained with me the whole trip. (Okay, so Why refers to a fork in the road. How was I to know?) 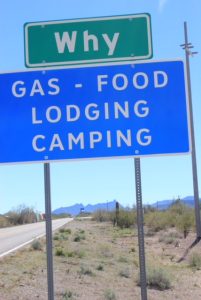 Before I show you the border wall, I have to show you a very special place we visited kind-of on the way to Nogales. 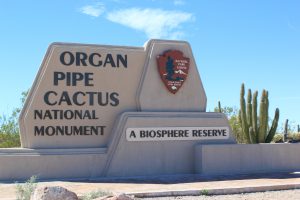 Organ Pipe is a Biosphere Reserve set up by UNESCO in 1976 to preserve the ecosystem of the Sonoran Desert for humanity as well as for scientists. On a hike or drive you can see 26 species of cactus. 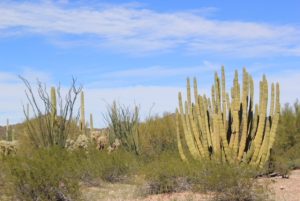 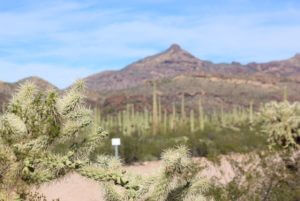 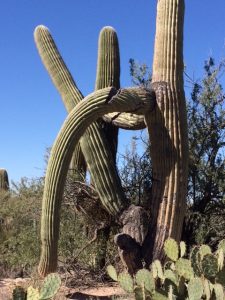 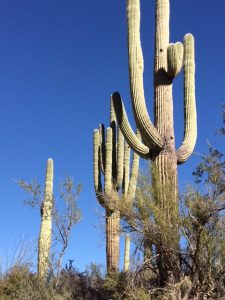 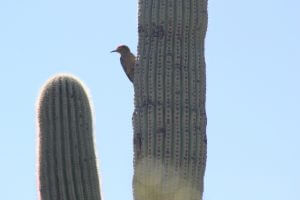 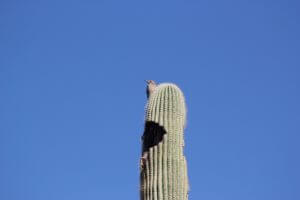 Gila Woodpecker and her nest

After Organ Pipe, we passed many miles of border wall. Parts are still barbed wire, others look more natural and blend in with the scenery. We only found this section below because a Park Ranger told us where to look. 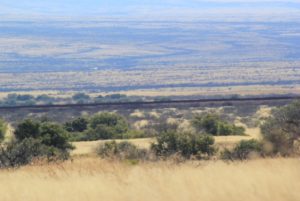 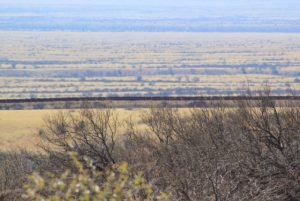 These walls appear lower than what we saw in Nogales, as the area between the west and Nogales relies heavily on the U.S. Border Patrol. Checkpoints on the highway appear often.

Highway 19 is a major north/south trade route through Arizona and ends at Nogales, where the road crosses the border and becomes Federal Highway 15, El Camino Real, in Nogales, Mexico. On the way into town, we drove past many—too many—insurance sales offices. Insurance to buy before you cross into Mexico. The necessity for such a business told me to be wary about crossing over.

Nogales means walnut, the name derived from the walnut trees that used to line the pass between Ambos Nogales, both Nogaleses. Now, all we saw on the hillside was metal border walls. 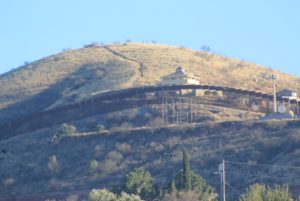 View from our hotel. The wall can be seen throughout the city. 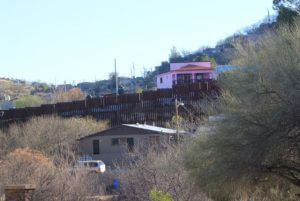 In town, I walked up to the wall and got a queazy prison feeling, maybe due to the 4-inch space between bars (aka rusty poles). It brought back the eerie feeling of crossing the Berlin Wall in 1984. 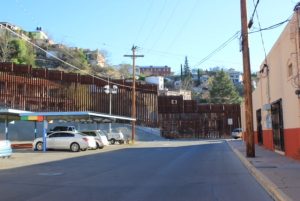 Nevertheless, Nogales is a friendly place, so I asked people in our hotel restaurant how they felt about it. From a small sampling of residents, the Gringos and the Latinos are happy with life in Nogales but find the wall ugly. Most aren’t sure how well it works. After it was first erected in 2011, traffickers tunneled under. Now they sometimes climb over.

Everyone else walks through. “It’s easy,” the diners said. “Americans cross to Mexico for better, cheaper food and alcohol and for affordable dental care. Mexicans cross to the U.S. for Walmart. No problem. You should cross.”

Instead, we shopped on the U.S. side at places where we could understand the Spanish product names but did not recognize the brands. Though Nogales, Arizona became part of the U.S. with the Gadsden Purchase in 1853, it still feels like part of Mexico.

The tall Nogales wall only runs for ten miles and then dwindles to small walls or patrol areas. 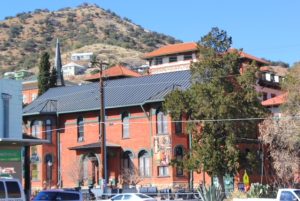 The heart of downtown, below copper-colored hills

The School House Inn is a comfortable and elegant BnB with interesting guests, a mountainside view, and a fantastic breakfast. Our bedroom used to be the history classroom. 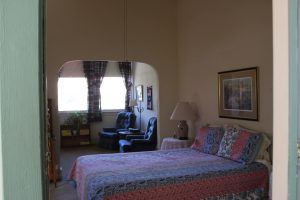 This is only half of our large bedroom

From Bisbee we took a quick side trip to Tombstone, which is expensive and touristy. I will stop at just telling you Tombstone is still there.

So back to my question of Why? Now that illegal immigration has been down for a while, why is it necessary to build the biggest, shiniest, most beautiful border wall at my expense?

The feature image is called 2014 Border Experpience—Nogales, from the National Farm Worker Ministry