Pearl Harbor: Who Were the Heroes? 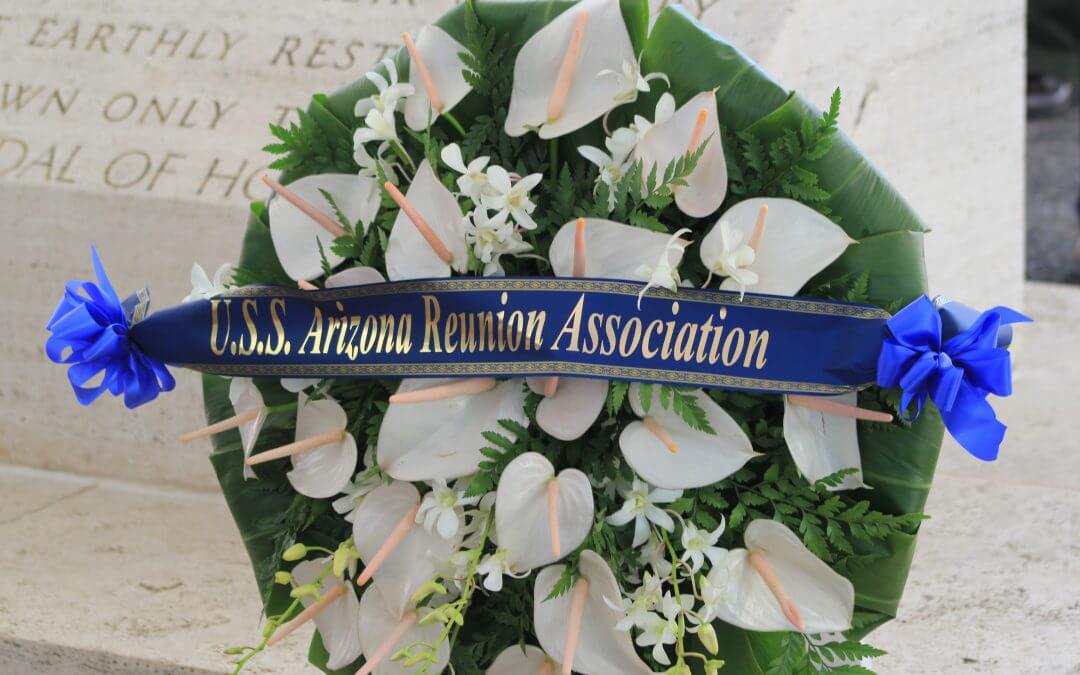 The WWII Valor in the Pacific National Monument at Pearl Harbor is a testimony to American resilience. It’s the bookend story of World War II where the war began and where it ended with Japan’s surrender aboard the USS Missouri.

This week our country commemorates the heroes (I’ll define that later) of Pearl Harbor. From December 1-11 many special events are open to the public, and on Wednesday, December 7th, ceremonies will air on national TV.

“By all rights, I shouldn’t be here.” (Wally Walling)

This 75th-year Celebration may be more meaningful than the Centennial because four of the five living survivors from the USS Arizona and 120 other survivors will participate in Wednesday’s ceremonies. Most are in their 90’s and older.

Right after arriving at the Harbor on Friday morning, my husband and I met, by chance, one of those survivors, Delton (Wally) Walling, 95.

Lucid and eager to talk, Wally revealed to us how life has a funny way of working itself out. In 1941, he was twenty years old and assigned to one of the ships based at Pearl. That December it was in dry dock for a few weeks, so the crew members were reassigned to other duties, with Wally sent to the control tower. 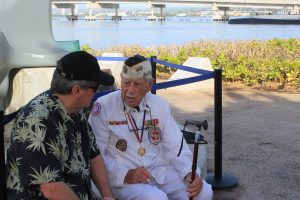 On December 7th, he wasn’t scheduled to work until 4 p.m., but he dropped by the tower in the morning. And then it happened, the  the first wave of Japanese planes. From the highest point on Ford Island, he witnessed the whole attack, a 360 view of devastation. With all the smoke and fire, a lot of the attack became obscured from view. Yet all of the details of the event, including the times, like 7:56 a.m., “are seared in my memory.”

In five minutes, his whole outlook on life changed. Where once he thought the U.S. was invincible, that suddenly became untrue.

He spent the rest of his time in the Pacific on a ship assigned to rescue. His job was to sew the deceased and their identifying effects into canvas bags. Identification of the fallen has been a theme this week.

Yet imagine Wally’s options. Had his ship been in commission, it’s crew would have been aboard and thus lost, like those on the 21 other ships in port. Imagine, too, that he was in the tallest edifice on dry land, and it was not struck. And finally know that although he has been suffering from bone cancer, he is thrilled to be in Honolulu this week. “By all rights, I shouldn’t be here.” 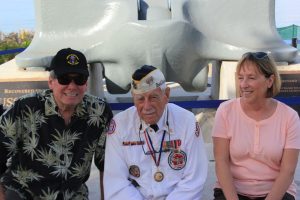 I’m glad he was there. It was an honor, sir.

Before visiting the memorial at the USS Arizona, visitors see a video with incredible footage of the siege. Hollywood never made a film so horrific. Some of the ships along “Battleship Row” sank where they were docked; the USS Oklahoma was hit and rolled over in eight minutes.  So many men, most in their late teens/early twenties, didn’t stand a chance. The film includes live footage of the attacking aircraft and the explosions which racked the fleet.

Japan’s goal was to take out America’s Pacific fleet so they could seize European colonies in Asia before we could get our Navy back at sea. I was surprised to learn how many of those damaged ships ended up back at sea. American ingenuity.

However, the Arizona burned for three days and could not be recovered. Only rusted pieces remain in view. 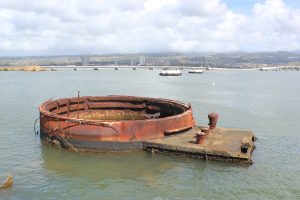 Today a memorial is built over the sunken ship. USS Arizona Memorial, seen from the deck of the USS Missouri

Many of the survivors who have passed on have chosen to have their ashes interred in the memorial. 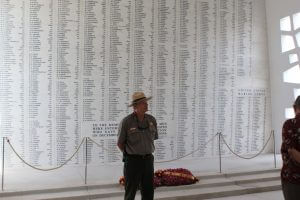 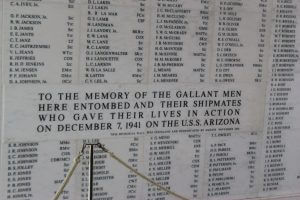 Burial Urn for the survivors who want to eventually be buried with their crew.

WWII ended on the deck of the USS Missouri, the last of the great battleships. 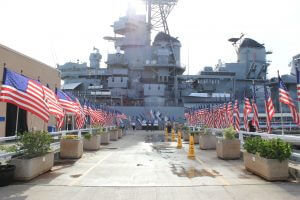 Beginning of the USS Missouri tour

To tour the Missouri is to see one of the last battleships. Aircraft carriers rendered them obsolete. 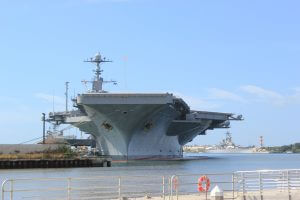 Beyond the modern aircraft carrier is the old battleship, USS Missouri 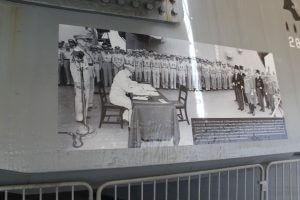 On board, General Douglas MacArthur preparing the surrender document for the Japanese signature.

While the Missouri wasn’t commissioned until after Pearl Harbor (in 1944) it saw action at Okinawa and sailed to Tokyo Bay to be the venue for signing the surrender documents. The end of World War II.

The Punchbowl Ceremony speeches honor the military and highlight new technologies for identifying the fallen.

Located high up in a lush, green circular valley in north Honolulu, the Punchbowl is an idyllic setting to honor America’s heroes. 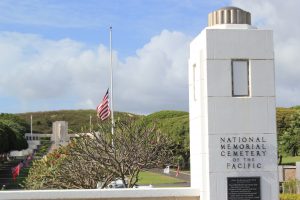 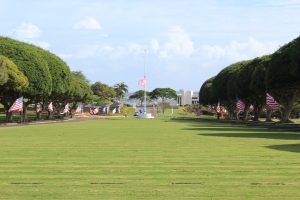 Under an open-air tent, we listened to speakers talk about the heroes of Pearl Harbor. The audience rushes forward to meet and thank the survivors.

The emcee began by defining them. Heroes do not set out to do courageous deeds. Heroes are everyday people–men and women–who respond with courage in the face of danger.  Who enlist in the military when our democracy is at risk. Yet, when the survivors tell you that the heroes are only those who gave their lives in the service of their country, that is not the complete picture. Heroes are also these survivors present today who jumped into action and did whatever needed to be done.

After this speech, one of those surviving heroes of the Arizona, Don Stratton, laid a wreath and paid tribute to his fellow seamen.

Then Jacqueline Ashwell, the Superintendent of the National Memorial, spoke about her career in anthropological forensics, undertaken because of her love for solving mysteries. At first, I wondered what this had to do with Pearl Harbor. But then I saw her passion for identifying the fallen and giving closure to families. She read a heart-wrenching letter (1942) from a mother to the Navy, which basically said, “Please tell me what you know about the details of my son. I’m still waiting.”

Now, after decades, DNA has identified all remains from the USS Oklahoma, as well as some remains from the Cemetery. Ms. Ashwell cited new remote-operated technology that has allowed researchers to explore the lower decks of the Arizona, revealing what occurred there at the moment of impact. And she ended with faith that future technology will answer even more questions. She made everyone proud of American science and technology. She made me want to redo college with her major. Military bands have been at most events. On Friday morning while we were talking with Wally, a small Air Force band entertained visitors to the Memorial. At the Punchbowl, a Navy brass  played hymns and patriotic music. Saturday featured an Andrews Sisters cover, and on Monday, actor, Gary Sinese’s Lieutenant Dan Band will perform.

One may wonder why there’s so much ado about a battle we lost. Why? Because we came back. The heroes of The Greatest Generation did what had to be done. With pure motives plus courage, cunning, and sheer will, we came back.