What Makes the Burmese So Spiritual? 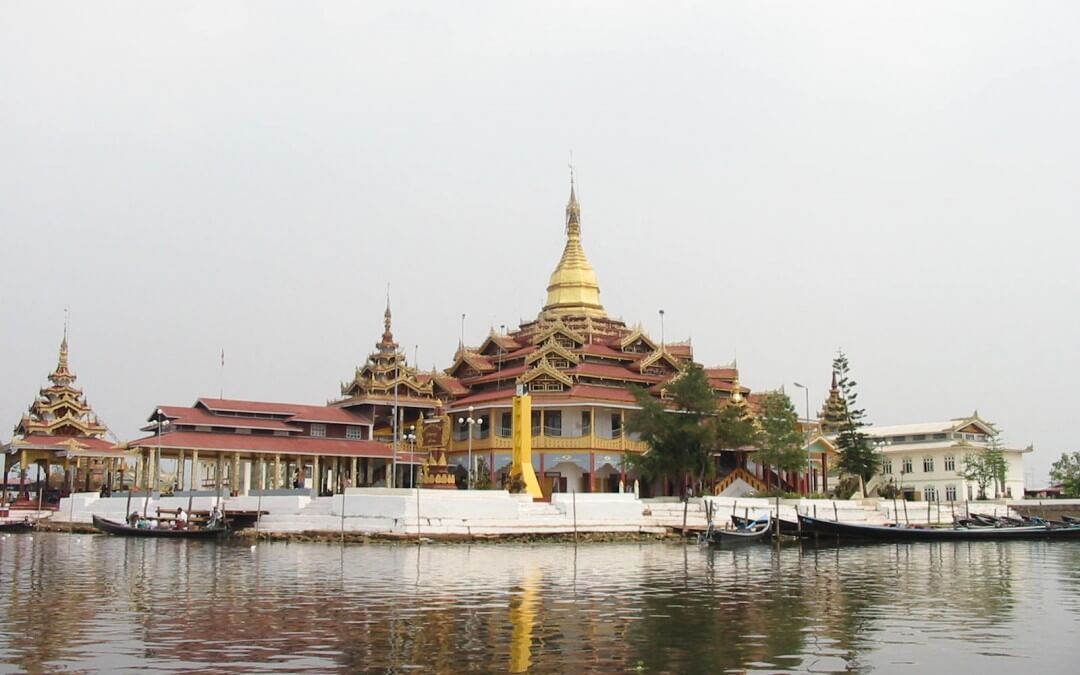 From the moment I landed in Yangon, Myanmar’s peace and serenity cuddled me like a babe in loving arms. It’s a pervasive spirituality created by the Theravada Buddhist belief in merit. Good deeds and good will increase the amount of merit one earns toward rebirth into a better life. And when 90 percent of a population practices intentional good deeds, a peaceful, nonviolent society results.

Pagodas survive because of merit

On a swelteringly humid evening in April, Southeast Asia’s hottest month, our EXO Travel guide met my husband and me at the airport in Yangon (formerly Rangoon). While riding to the hotel we were suddenly mesmerized by the gleam of gold glistening against the night sky. Though tired to the bone, we had to stop. 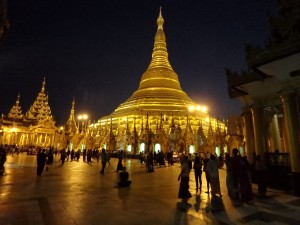 The Shwedagon Pagoda, Myanmar’s holiest shrine, is covered in eight tons of gold and studded with around 2,000 diamonds. And why aren’t they stolen? Because dishonesty decreases one’s merit.

We entered to join the throng of Buddhists in the midst of a good deed: paying homage to the Buddha by circumambulating the bell-shaped stupa in the ritual clockwise direction. The Buddha did not want anyone to worship his image. But humans need the tangibles, so stupas were erected instead.

Ancient holy sites like Shwedagon survive because people are eager to donate money to gain merit. 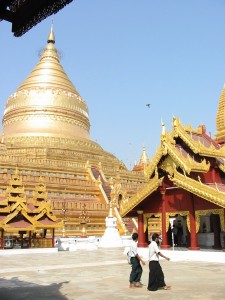 While Yangon has several pagodas, Bagan (formerly Pagan) has thousands. Schwezigon Pagoda was completed in 1086 and contained Buddha’s collar bone and tooth. Though many think the relics are gone, people still worship there believing in the sanctity of those holy relics. 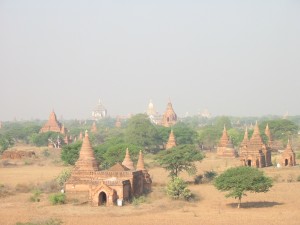 Take a horse-drawn carriage at sunset to view the sixteen square miles of Burmese history or view the landscape from the top of the Shwe San Daw Pagoda. You can see small family pagodas as far as the horizon. Most are made of baked clay bricks; the white ones are covered in stucco. To earn merit according to Theravada, which means “The Doctrine of Elders,” people erect and care for pagodas dedicated to ancestors.

Mandalay, the Center of Buddhist Culture and Learning

Another way Burmese love to earn merit is by feeding the monks, who wander through the streets of Mandalay in the morning. 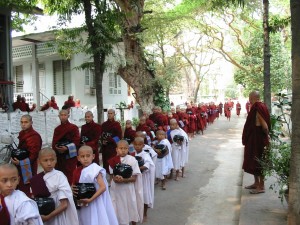 Adult monks are the great activists of Myanmar. They led the 2007 Saffron Rebellion, a peaceful protest against the military junta. Another tool of peaceful protest is to refuse food donations from government officials, which denies (and possibly decreases) their merit.

Inle Lake, the Farm on Water

Buddhists believe in persistence over laziness, and their creative solution to farming, using hydroponic gardens, produces the planet’s best tomatoes. 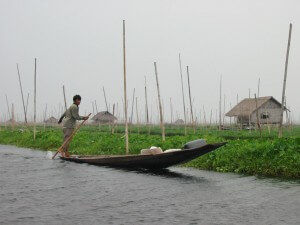 Our boat tour took us through the gardens and then down canals to little villages and markets on stilts. The boat pilot stood on one leg and rowed with the other. His skill earned him a big tip, even though a storm blew up, and he couldn’t find the way back to our hotel until he and the guide rowed together. 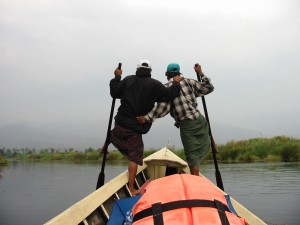 Soaked to the bone, we finally located the Inle Princess Resort, where we wrapped up in blankets, uncorked a bottle of wine, and sat on our deck cantilevered over the water. Suddenly the trees across from us burst into a cloud of white as hundreds of egrets landed, while rick rick ricking to each other until the pink sky succumbed to the darkness.

The new 2011civilian government, Hillary Clinton’s landmark visit, and the recent peaceful elections have cranked the wheels of progress. As Aung San Suu Kyi assumes power, the country still feels like old-world Asia, yet my friends who live there have already observed some inevitable changes.

The lifting of Western sanctions has increased business and tourism, which has increased traffic. Progress is bringing prosperity to a formerly anti-materialistic society. New values will arise. Old ones may fade away. Suu Kyi has always been about merit. Will the tradition survive in a new economic reality?

Prosperity tends to bring greed, and greed brings crime. Thefts and attacks on women, unheard of even a year ago, have occurred in Yangon.

At this time all of Myanmar remains incredibly safe. Visit now if you want to see how Buddhism has worked for centuries. Visit now to experience the most spiritual country on earth, just in case progress tries to turn it into something else.