How To Save The Pygmies A group of missionaries in the Congo was collecting money to translate the Bible into a tribal language for Efe pygmies. I could not donate until I traveled to the Ituri National Forest to evaluate the situation for myself.

Turns out, the gentle Efe are already good people–one of only two cultures in the world with no incidence of rape. They also have religion, sharing creation myths and believing in the spirits of the forest. Could something irreplaceable be lost in this translation project?

After an eight-hour jeep trip on an impossible road, my two friends and I boarded a dugout pirogue and traveled deep into the rainforest, the humidity increasing with each kilometer. A short, sweaty hike along a dense path took us to a clearing, where the village sat below thick leafy foliage, shading the afternoon sun. We found a smattering of igloo-shaped huts with mongongo leaves (from a nut tree) covering frames made of bent saplings. Campfire embers sent up wisps of smoke. 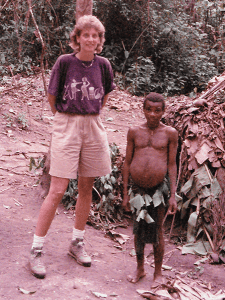 Pygmies are born an average human size but growth slows down at puberty, with males reaching four foot eleven and females four foot nine. Their weight is proportionate to their height. And as hunter-gatherers, they are agile and light on their feet.

An older woman—so to speak, forty is the life span—wearing only a leaf skirt, sat on the ground by the campfire. She tended to three well behaved children and smoked what looked like a joint while the strong scent of cannabis filled the air. She gazed at us with a far-away look and mumbled to our guide that the men were out hunting, and, just in case, the women had walked to a market to trade forest products and/or labor for produce and grains.

Songs, whistles, and shouts soon emanated from the forest. Pygmy men in bark loin cloths tromped into the village and welcomed us. They burst into a spontaneous culture show, with drumming, piping, and dancing that went on forever. We grew uncomfortable. We assumed they were lobbying for a large tip, but actually continuous music is one of their signature cultural practices. We smiled, enjoyed the first ten minutes, and made peace with the rest. Later a group of equally-gracious women arrived bearing fruit and vegetables.

The next morning a barefoot troop of men, armed with bows and poison-tipped arrows, led us through the rainforest. They were adorned with monkey fur, indicating the forest was not deplete of game. Yet though we spotted a few ruﬄes in the treetops, no monkey would be caught that day. A young man led us to a beautiful waterfall with some tiny crabs he could take home for snacks, I presume. We thought we were alone, but every time we snapped a picture, a pygmy jumped out of the forest and photo-bombed our shot. Surprise! Then he would flip out an upturned palm.

This plus the sale of inferior tourist-quality instruments at the end of our morning made us sad about the way the Efe changed their behavior, cheapened their traditions, around foreigners. Normally they hunted, gathered, tended to their families, and made music. That day they did meaningless stuﬀ that probably made them as uncomfortable as it made us. But it was necessary. Their habitat is shrinking, and if hunting doesn’t serve them, they must have money to survive.

“When the forest dies, we shall die.” (Erin Fitz-Henry quoting the Efe people)

And it’s true: saving the pygmies means saving their rainforest habitat, from the loggers, poachers, and war lords. So I have put my eﬀorts into publicizing the plight of the pygmies. As for salvation, the Bibles were eventually finished, but I’m pretty sure God already loved them anyway.

Postscript: After my visit, civil war broke out. National Geographic tells the story of the pygmies during and after the war. Innocent and sincere, they did not fare well. Their pacifism and size made them easy prey for rapists and cannibals.